16 chapter members gathered at the Museum of Industry for a general tour of the Museum and a focused visit to the area devoted to printing. The meeting was suggested by Val Lucas and carried out by George Barnum.

Apologies to everyone who went in the first group as they didn’t get into any of Ray’s photos. 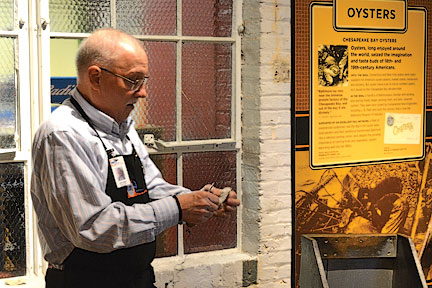 John gave us a nice walk through of some of the important early industries. In the instance above he is showing us how to shuck an oyster. In the early days the tonnage of oysters that came out of Baltimore was staggering. 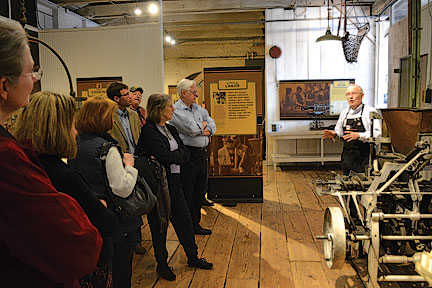 Here john explains the canning industry. Hard to imagine how things worked in the early days. It is easy to sit around today and talk about how hard people work. They were in a completely different league back in the 1800s. 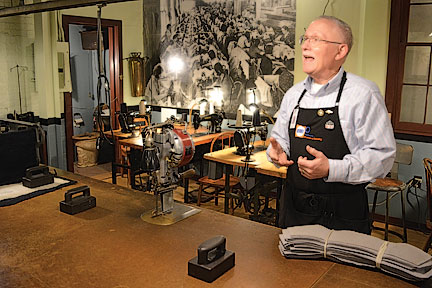 The garment industry went through some radical improvements once electricity was available. Just to John’s right is a cutter that would just slide along and cut dozens of layers of cloth at one time which was a great change from a 2-pound pair of scissors. 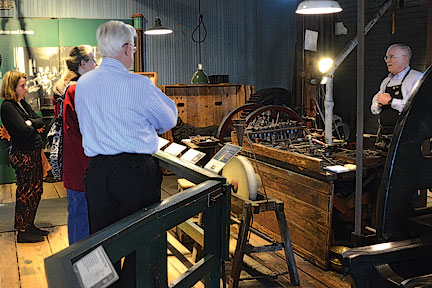 This was taken in the machining room. Steam and electricity caused an explosion on manufacturing potential.

Then it was over to the print shop which is what all of us had come to see. 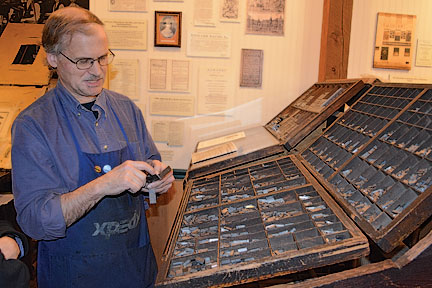 We got a nice explanation of how job cases worked, upper and lower case, etc. 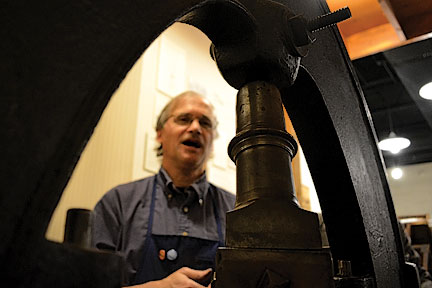 A moment of artiness caught our guide through the 1830s acorn iron handpress. 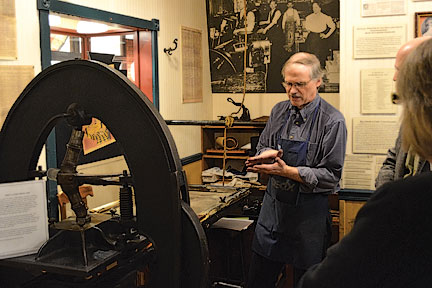 A nice view of the acorn press. Guess where it it got that name. 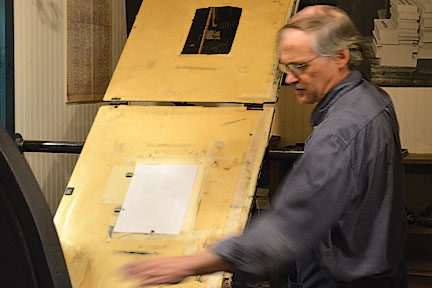 Showing how the tympan and frisket work 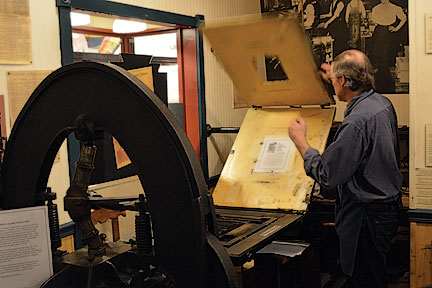 A nice view through the acorn press to the workings of the frisket and tympan. 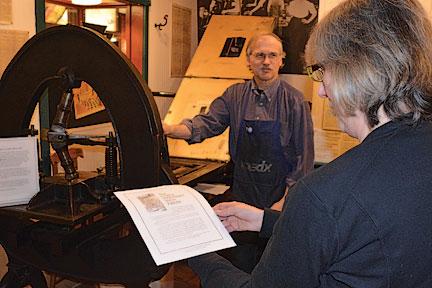 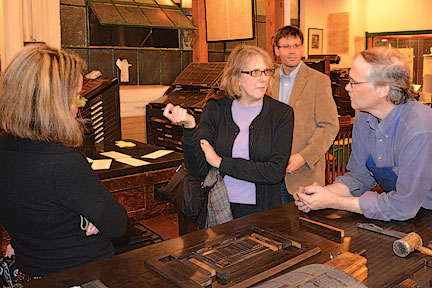 I suspect having a group like ours in the house is fun for the docents that work in the shop. There was a constant stream of intelligent questions. 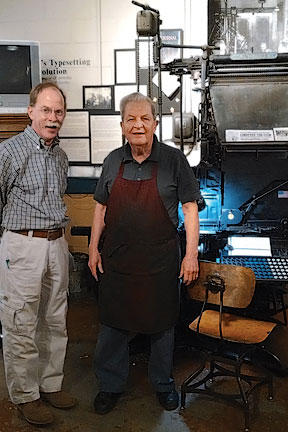 George Barnum and Ray Loomis standing at the Museum’s Linotype. 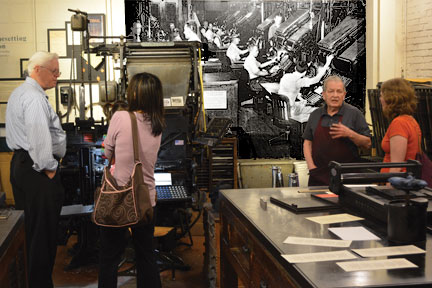 Our next stop, show above, was going to be with Ray Loomis and a 1936 Linotype. The Linotype, which cause an explosion of information and communication, was invented by Otto Mergenthaler in Baltimore in 1886. 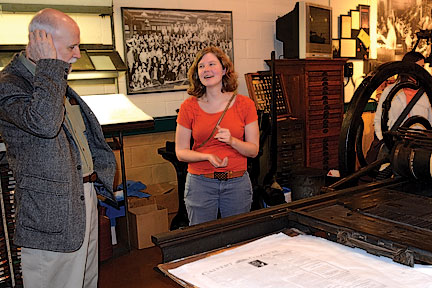 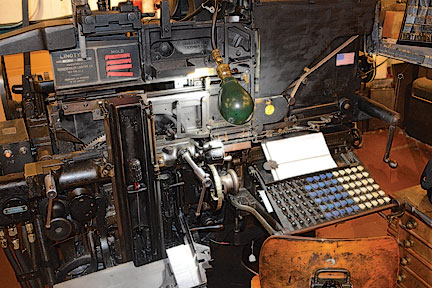 This is a nice view of the 1936 Linotype they use in their demonstrations. Definitely a sweet piece of equipment. 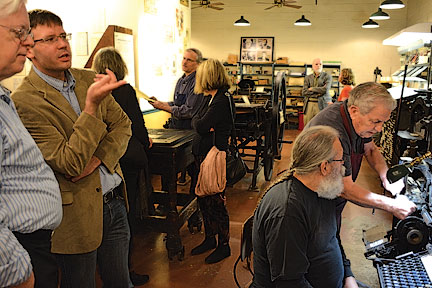 A nice view of our group in the print shop. 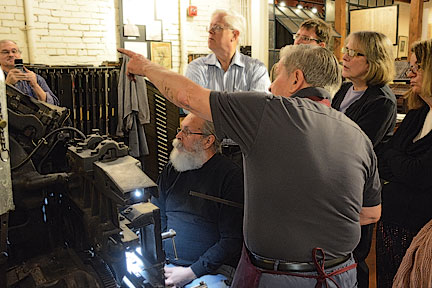 Ray Nichols sitting at the keyboard listening to Ray explain the photo on the wall of the main Baltimore newspaper. You can see it in the background five pictures above this. 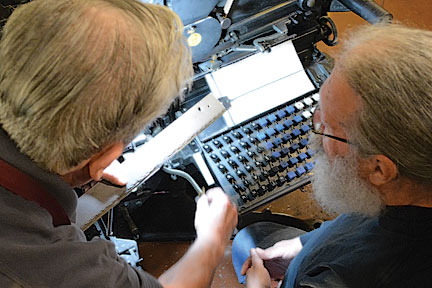 Ray showing Ray the mechanism for how the keys work to get the Linotype matrices back into the correct space in the magazines. 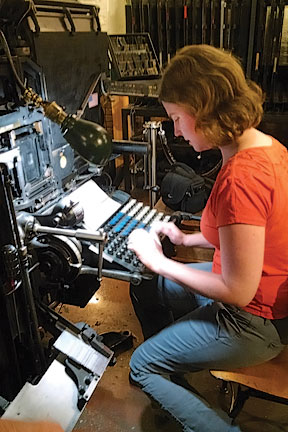 Val Lucas taking a run at casting a line of ‘hot metal’ type. 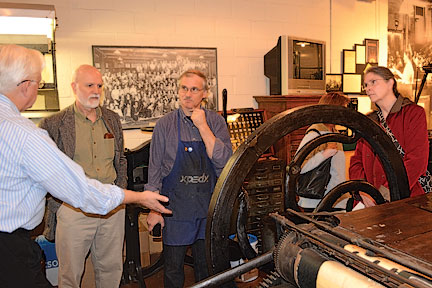 Stan Nelson adds some information to the printing process on this handfed newspaper press that was also hand powered. Ugh. That would make for a long day. 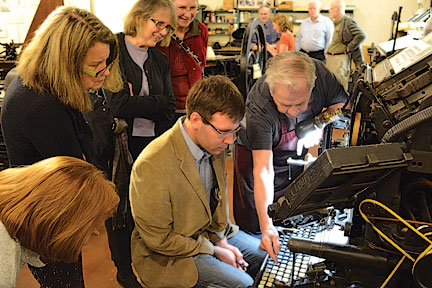 Kevin, one of the Mike Denker fellows, taking a turn at the Linotype with a bunch of inquisitive eyes checking out the process. 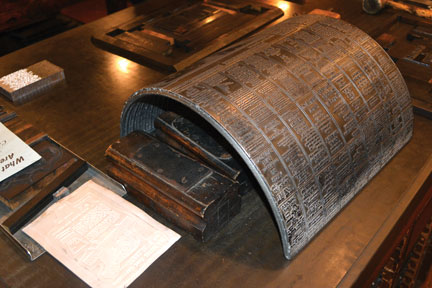 A stereotype plate for printing the Baltimore newspaper. 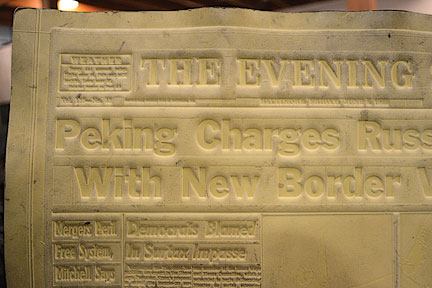 This is a mat made from wood pulp (I think) that would be used as a mold for making one of the stereotypes. 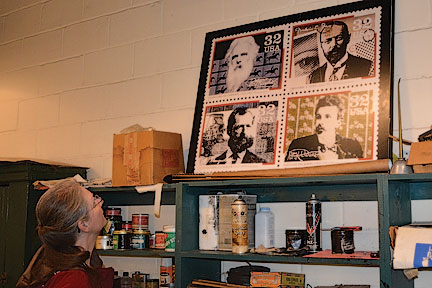 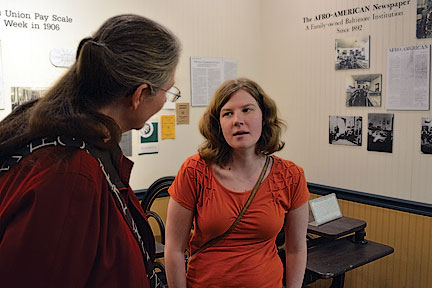 Jill Cypher and Val Lucas having a conversation.

I think it was a good day for everyone