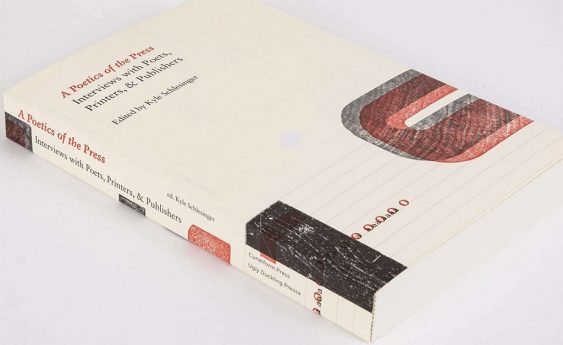 I have never marked a book up. No marginalia for me. My books tend to stay pristine. But almost immediately there were moments in each of the 16 interviews with book makers that spoke to my head, my heart, my experiences, to a passion for books, and to poetry. I guess that’s why editor Kyle Schlesinger titled this collection A Poetics of the Press. I filled my fountain pen with violet ink and began marking up passages.

From the beginning, reading the interviews turned into a wide-ranging experience. I read every word, even though a couple of the interviews were a little pedantic and windy for my taste. There would be a blizzard of names and presses and poets. But even those offered gems I marked up. I wondered, “Who would read this book?” It seems to me that students seeking inspiration and validation for their own passion for book making will find much here. Makers who want to take a broader view of the book world they inhabit can take solace in challenges facing those who have preceded them and challenges that were met. And I think anyone interested in the act of publishing and the various physical modes of making will want to read this. Poets and artists will find a window into the thinking about and the practice of creating physical objects from their words and images. I found myself comparing moments in these makers’ lives with my own chronology. What was I doing in 1976 that Annabel Lee was doing the same year? It was fascinating to compare notes.

The start of a career and life making books seems to begin in a similar way for most—wandering and discovering, by accident sometimes, that making books in one way or another exists. This is shared by the interviewees, each of whom has gone on to make significant contributions to the world of books and publishing.

In response to Kyle’s question about putting out-of-print books online, Lyn Hejinian says, “… I’m not in love with the online world. I think it’s a myth that it’s longer-lasting or that it’s a better archive. That said, it’s a great resource, and without it, this stuff basically disappears.”

It was so fresh to read the interview with Mary Laird, and for some insight into the many years, she shared the work of making Perishable Press books with Walter Hamady. “I read a great deal as a child. I associated reading with birds and expanse. Freedom. Escape. Totality. Expression. Vastness. Creativity.” “Holding that book, and daydreaming, reading in a tree or a hammock … reading at a coffee shop … these are ‘ah’ experiences. Slow and enjoyable. Setting type is slow. Folding the paper is slow. If Slow Food has made a comeback, let’s watch those headlines for Slow Books.”

Steven Clay of Granary Books is interviewed deeply about the trajectory of his career and points to the outsized influence his work has had on the world of book making and book criticism.

Charles Alexander says, “I’ve always been interested in making the reader aware of the act of reading, which is physical—unfolding, pulling something apart, and peeking in. There are various kinds of things you can do with the structure of the book that activates qualities in the reader that are not just about turning the page, and not just about the text as a disembodied substance.”

Inspired, Inge Bruggeman says, “Over the years there has been a lot of pressure to abandon the literary-based books in favor of work that is solely my own. It is easier, with this kind of work, to get exhibitions and show your own work in the contemporary art world, instead of continuing to work in a more marginalized zone, however, I am still compelled and inspired by the traditions of the fine press book.” In a moving response to reading Alan Loney’s poems she says, “I could really feel the connection between the word, the body, and the book, each one essential to the other—the poems are life, our impermanent bodies are not. In the face of intense tragedy, it is sometimes difficult to find relevance in the seemingly small act of writing a poem or making a work of art, but in actuality, it is the most fundamental to who we are. The poems made me think about faith, not a religious faith necessarily, but a belief in our own simultaneous smallness and brilliance.” This brought me to a hard stop.

Aaron Cohick says, “Print is not dead … This is a time to be making work, not objects—objects that are a fortress of ossified tradition—but work that does work, that sees that everything that we love and cherish about print and books is part of a living culture, subject to a dependent upon change for its vitality. Print is only dead if we try to freeze it in time. We can let the things we love, the things that help us draw meaning from our lives, gather dust in the museums, safe and dead, or we can take them out into the world and see what they look like in the crazy, crashing sunlight.”

And one of my favorite interviews is the final one in this book with Scott Pierce of Effing Press. I really appreciate a maker who will swear like a pirate during an interview. My kind of printer. He said, “Charles Potts was this sage guy … I met him and he gave me my first advice on small press. He said, ‘You’re gonna burn out. Until you do, go crazy.’ That’s what I did. I think that first year there were probably eight or nine books. That’s all I did. We made books. We just made books.” There is a whole sweet section on the San Francisco poetry scene in 2004 where rolling on the floor fistfights occurred. This book ends with Scott saying, “There are things to fight for, and it’s worth doing what it takes to get in there. The mode you do it in: we choose paper in books, and I always will. I fuckin’ hope I always will because there’s that history there. You still want to feel that romantic feeling of ‘My God, I got a rare thing in my hand. I want to read this. I want to keep it forever untouched and unedited the way it is.’ It can’t be deleted. It can be burned in fire. It can be destroyed in a flood.”

Kyle Schlesinger has done a superb job with these interviews. I learned many things from people I knew little about. I found connections between people and places and decades. I would have enjoyed brief updates on what these individuals have been doing since their interviews.

My copy of A Poetics of the Press is nearly ruined. The spine is torqued. The corners of the book are dented. My violet ink is scribbled over the pages. It has been well-read. I wholeheartedly recommend this thoughtful and thought-provoking book.

Steve Miller founded Red Ozier Press in Madison, WI, in 1976 — a fine press devoted to publishing handmade books of contemporary poetics and art. In 1979 the press moved to New York City, where Ken Botnick joined the operation. The Red Ozier archive was purchased by the New York Public Library just as Miller joined The University of Alabama in 1988. There he taught letterpress printing and hand papermaking and was Coordinator of the MFA in the Book Arts Program. In 2011 the Book Arts Program received the Institutional Award from the American Printing History Association. He is now Professor Emeritus. His Red Hydra Press work includes ongoing collaborative book projects with Cuban artists. Miller received the 2012 Distinguished Career Award from the College Book Art Association. He is past chair of the Penland School of Craft Board of Trustees.