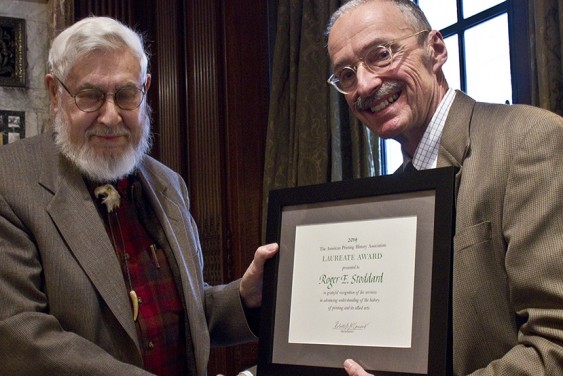 Roger Eliot Stoddard was born in Boston, graduated from Brown in 1957, and began his career and an assistant curator and then curator of the Harris Collection of American Poetry and Plays at that institution. In 1965 he began a long professional association with Harvard University, and in particular with the Houghton Library.

His research has been broad in scope, but a recurring subject has been poetry in America. His first major publication was Pamphlets Unrecorded in Wegelin’s Early American Poetry (1969), and it was followed by The Poet and Printer in Colonial and Federal America (1983). His landmark study of glosses, catchwords, and signatures of early printing, appearing in Marks in Books, Illustrated and Explained (1985) won the Northeast Book Show Award in 1986 and an American Library Association Award in 1987. Most recently, with David Whitesell as editor, Roger compiled a landmark bibliography published last year by the Bibliographical Society of America (in cooperation with the Penn State Press) entitled A Bibliographical Description of Books and Pamphlets of American Verse Printed from 1610 through 1820. It is a comprehensive culmination, comprising over 800 pages and 1300 entries, of his early work previously mentioned.

In recognition of this work, and of other lectures, articles, and books too numerous to mention, I am happy to announce that the 2014 individual award by the American Printing History Association will be given to Roger Stoddard.