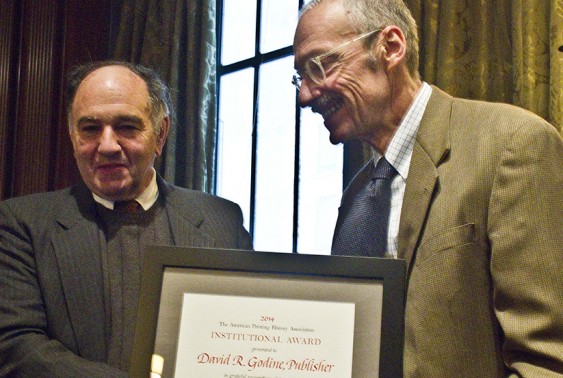 Publishing in print or in electronic media is today mostly undertaken by one of six large firms: Hachette, HarperCollins, Macmillan, the Penguin Group, Random House, and Simon and Schuster. Known as the Big Six, only two are US companies (Simon and Schuster and HarperCollins), two are German, one British, and one French. Coincidentally or not, that arrangement and order of arrangement roughly follows the size of the respective market capitalizations of the stock markets in the four countries involved. In contrast, on its website, David R. Godine, Inc., describes itself as “a small publishing house located in Boston, Massachusetts” producing about twenty to thirty titles yearly that “reflect the individual tastes and interests of its president and founder David R. Godine.” This is not, in other words, just another business venture.

Those tastes and interests include art and photography, music and food, Judaica, nature and gardening, fiction and poetry, and what Mr. Godine calls “regional books” (which of course to him only means New England). Perhaps more to the point here, at APHA, the interests include typography, with such backlist titles as An Essay on Typography by Eric Gill and Personal Impressions: The Small Printing Press in Nineteenth Century America by Elizabeth M. Harris, and many other titles. David R. Godine, Inc. is also the exclusive licensed distributor for the backlist of the Black Sparrow Press, founded in 1966 by John Martin to publish out-of-the-mainstream writers in small finely printed editions. Black Sparrow remains alive as an imprint of Godine.

The eponymous originator of this publishing house, David R. Godine himself, began his professional life, after graduating from Dartmouth and Harvard, with Leonard Baskin and Harold McGrath but soon opened his own print shop in an abandoned barn where he printed, by letterpress, his first books.

Among the titles involving printing history that have been published by this institution are Into Print: Selected Writings on Printing History, Typography and Book Production by John Dreyfus (1995), Suzuki Harunobi: A Selection of His Color Prints and Illustrated Books by Jack Hiller (1970), Art of the Printed Book 1455-1955: Masterpieces of Typography . . . from the Morgan Library with an essay by Joseph Blumenthal (1974), The Printed Book in America by Joseph Blumenthal (1977), and Early Children’s Books and Their Illustration by David Gottleib (1975), just to name a few.

In recognition of this long dedication to keeping publishing alive and of human proportions, and in recognition of the role printing history has played in that work, I am happy to announce that the 2014 institutional award by the American Printing History Association will be given to David R. Godine, Inc.