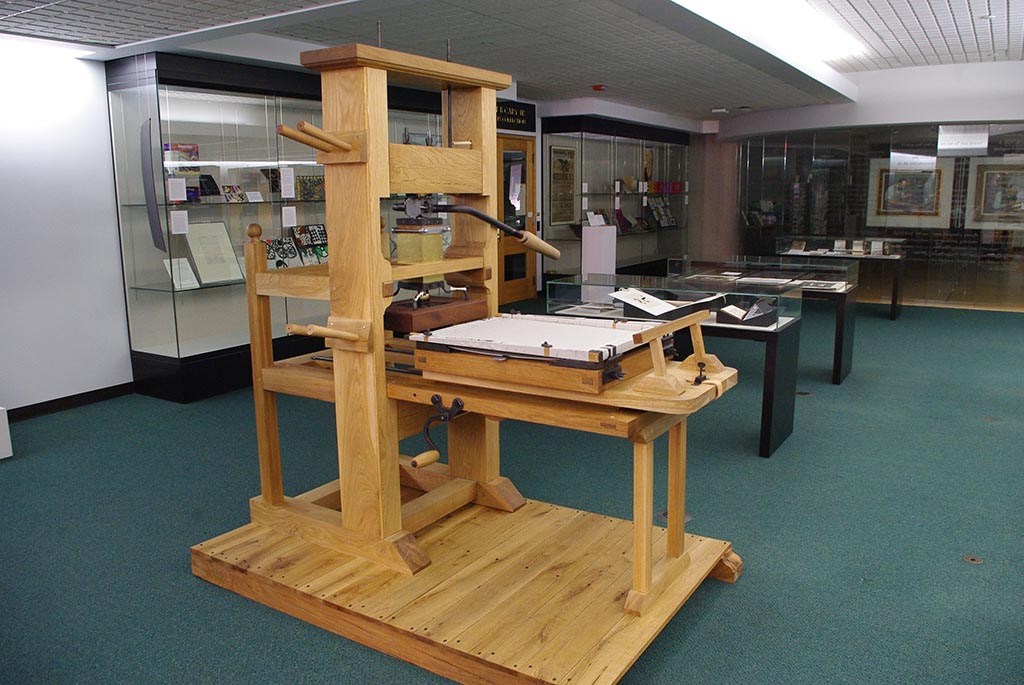 The completed press, named the Uncommon Press, at the Cary Graphic Arts Collection at RIT. (Photos by Seth Gottlieb except where noted)

This is the sixth and final post in a series that began last year.

Building a wooden printing press takes more than physical means. It requires a great deal of patience and humility. Of course, it also takes tremendous hubris to complete one within a single calendar year. The project would be completed on time and under budget, we told ourselves. There was no other option.  END_OF_DOCUMENT_TOKEN_TO_BE_REPLACED 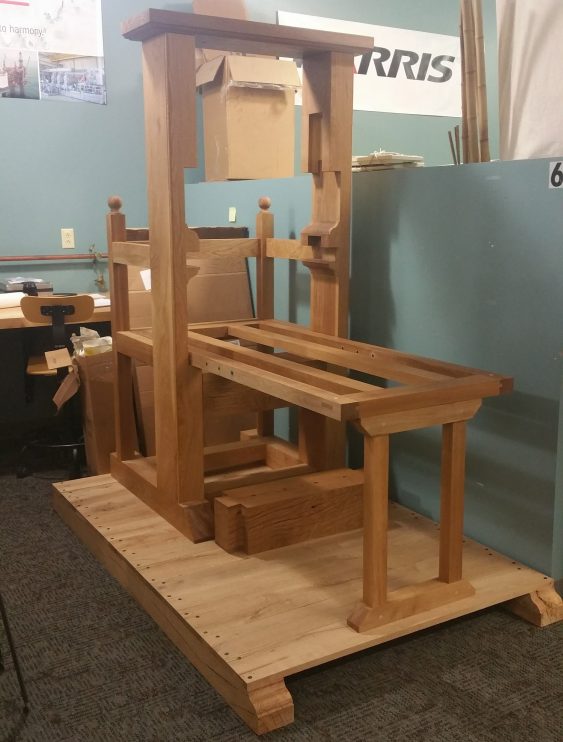 The partially constructed Uncommon Press at RIT, soon to be housed at the Cary Graphic Arts Collection.

This is the fifth in a series of posts that will appear throughout the year.

It shouldn’t come as a surprise that building a wooden common press is a massive undertaking in more ways than one. Literally, a common press is huge, standing over six feet tall and weighing a few hundred pounds. But, it’s everything that goes into actually constructing a press that really adds up.  END_OF_DOCUMENT_TOKEN_TO_BE_REPLACED 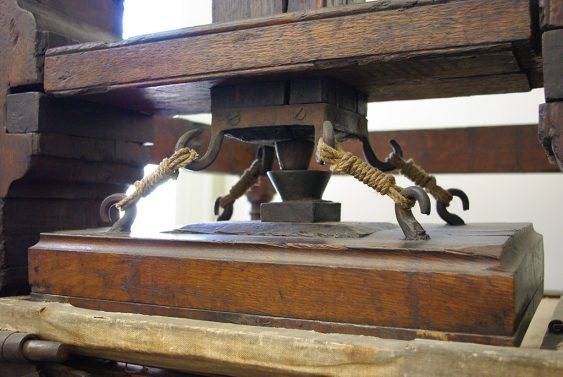 The platen and hose of the James Franklin Press in Newport, RI.

This is the fourth in a series of posts that will appear throughout the year.

The term “wooden common press” is fairly self-explanatory. It is a press, and it is made of wood. Before the invention of the iron hand press, all presses were common presses, and all of them were wooden. Since January, my teammates and I at Rochester Institute of Technology have been designing an eighteenth-century wooden common press. What proved to be one of our greatest challenges—and one of our favorite adventures—was the search for wood from which to build the press.  END_OF_DOCUMENT_TOKEN_TO_BE_REPLACED 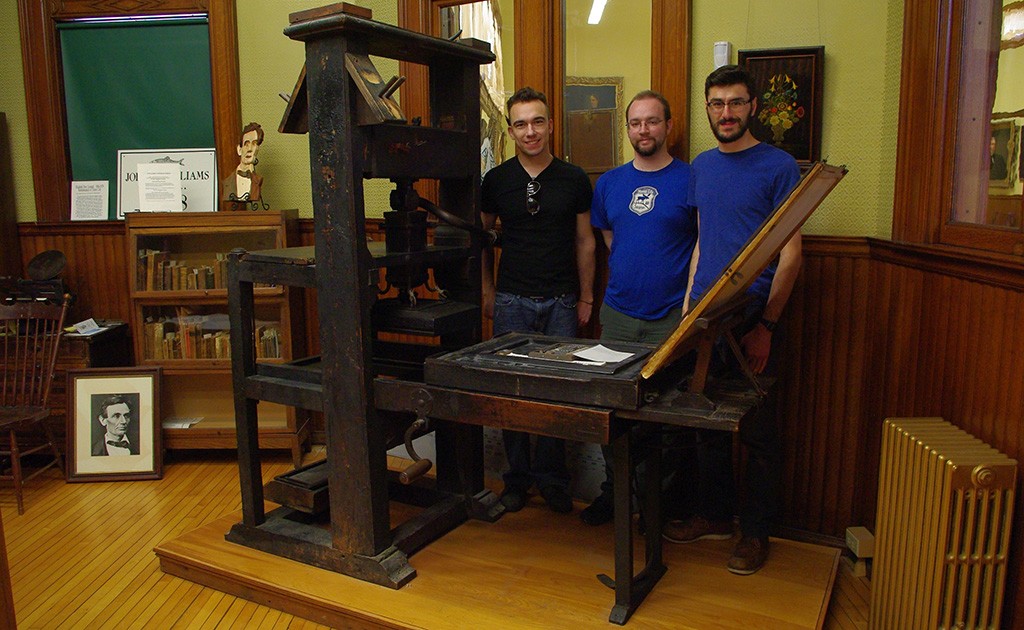 The Robert Luist Fowle Press with teammates (from left to right) Daniel Krull, Randall Paulhamus, and Seth Gottlieb at the Exeter Historical Society.

This is the third in a series of posts that will appear throughout the year.

The process of researching wooden common presses for the sake of building a historically accurate reconstruction is an intensive one, to say the least. While most college students would have spent their Spring Breaks relaxing and goofing off, some of my teammates and I spent our break traveling through New England visiting printing presses. That’s not to say the trip wasn’t fun, but it was intense. We saw four presses in as many days and as many states. Three were original presses from the early eighteenth century (or possibly the late seventeenth, because the provenance of some isn’t clear), and one was a reconstruction made in 1950 from a design by Ralph Green, an engineer and amateur historian of printing presses.  END_OF_DOCUMENT_TOKEN_TO_BE_REPLACED 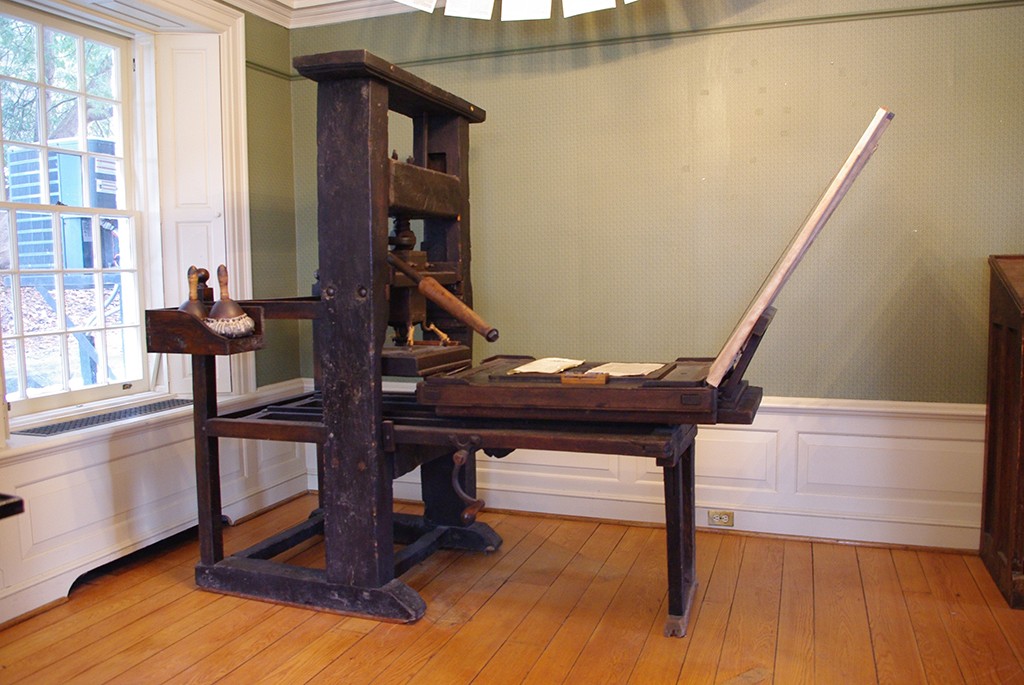 The Louis Roy Press at the Mackenzie Printery and Newspaper Museum

This is the second in a series of posts that will appear throughout the year.

When designing a wooden common press, there’s only so much information available in print. Printer’s manuals, like Caleb Stower’s 1808 manual, The Printer’s Grammar, describe the parts of a printing press, but not so thoroughly as to provide all dimensions. These manuals are useful, but nothing beats being able to measure the real deal. Our team was fortunate enough to visit the Mackenzie Printery and Newspaper Museum in Queenston, Ontario on February 20th to examine and measure the Louis Roy Press held there. Roy was the first King’s printer in Upper Canada and printed the Upper Canada Gazette, beginning in 1793.  END_OF_DOCUMENT_TOKEN_TO_BE_REPLACED 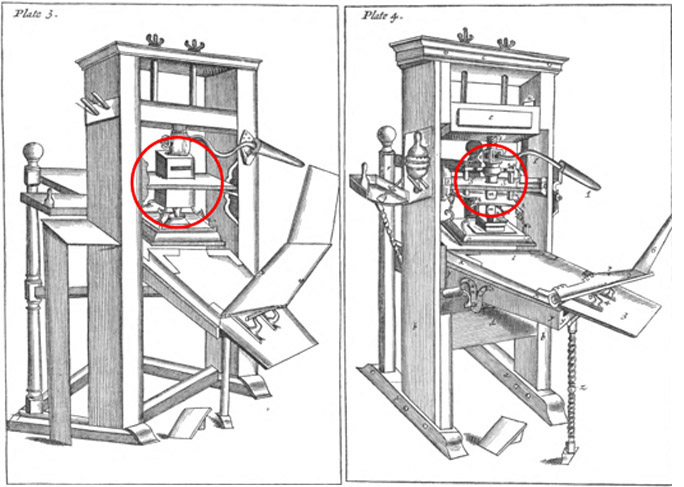 This is the first in a series of posts that will continue throughout the year.

Beginning in late January and continuing through the middle of December, a group of four students at the Rochester Institute of Technology will be designing and building a wooden common printing press to be installed in the Cary Graphic Arts Collection there. The team consists of myself, Seth Gottlieb, Ferris Nicolais and Randall Paulhamus, all Mechanical Engineering majors, and Veronica Hebbard, an Industrial and Systems Engineering major. END_OF_DOCUMENT_TOKEN_TO_BE_REPLACED 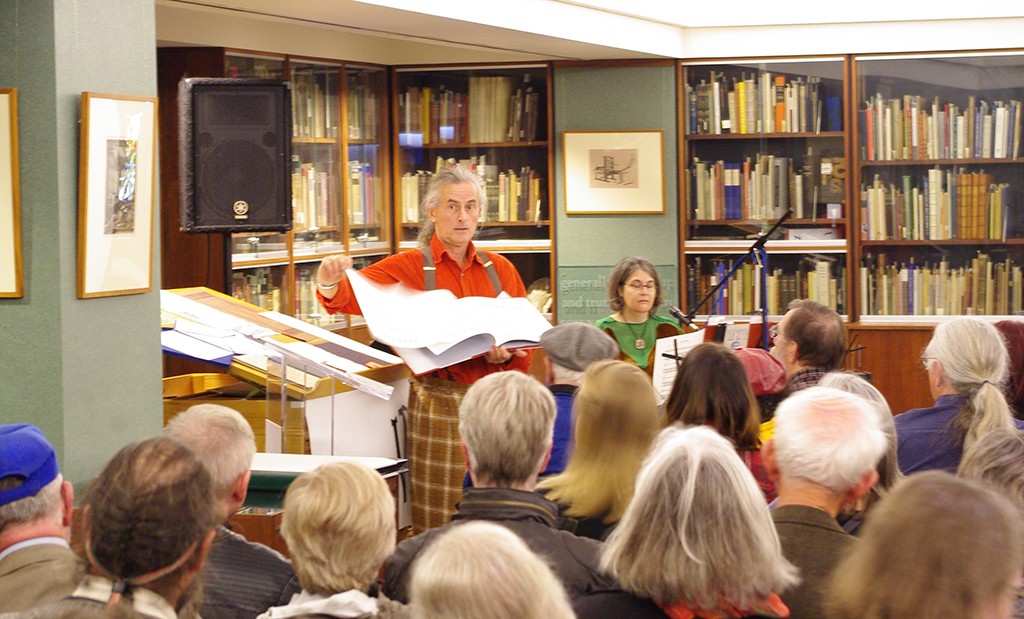 The lecture and musical performance by Gwido Zlatkes and Ann Frenkel was a wonderful way to end the first day of the annual conference. In their presentation spanning just over an hour and a half, they provided insights into the history and function of their Vigoda Press. Gwido, originally from Poland, met Ann while she was working in a university library. Primarily, the pair publishes original translations of Polish poetry set to original scores. The two also perform their own experimental theater pieces. For each book presented, Gwido discussed the original writer and his translation of the piece, after which Ann performed one of her original compositions.  END_OF_DOCUMENT_TOKEN_TO_BE_REPLACED