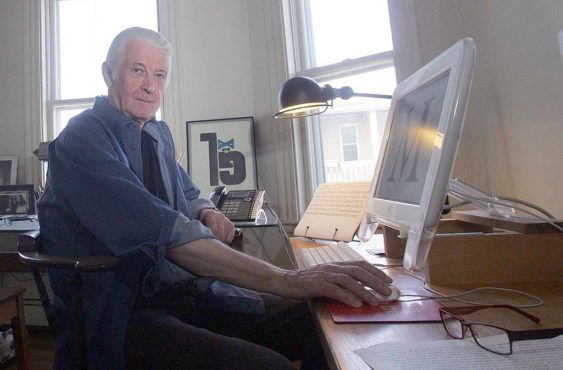 APHA New England is delighted to announce that Matthew Carter will present APHA’s Lieberman Lecture on Saturday, December 3, 2016, at 2:00 PM at the Museum of Printing in its new location at 15 Thornton Avenue in Haverhill, Massachusetts.  Please RSVP.

A number of Matthew Carter’s designs have been based on historical types, ITC Galliard, Big Caslon, Miller, Vincent, and the Yale typeface among them. Others, like Snell Roundhand and Mantinia, were derived from non-typographic sources from the past such as handwriting manuals and lettering in the work of a painter. In this lecture Carter explains his debt to the historical legacy, and describes cases where historically-based designs have been adapted to the needs of contemporary clients. His type revivals have varied in their faithfulness to their models, which raises questions about the responsibilities of the continuator of traditional forms, about degrees of interpretation, adaptation to current technology, ancestor worship, and travesty.

Alice Beckwith is a professor emerita of art and architectural history at Providence College, President of the New England Chapter of the American Printing History Association, and Chair of the Oral History Project. The most well known of her twelve book exhibitions, Victorian Bibliomania, the Illuminated Book in Nineteenth Century Britain, received the Gold Award from the Council for the Advancement and Support of Education. Her catalog for Illustrating the Good Life: The Pissarros’ Eragny Press, 1894-1914,  received the American Library Association Leab Exhibition Award,  through the Association of  College and Research Libraries, Rare Books and Manuscripts Section, and was reviewed in Printing History, New Series Number 3 (January 2008).