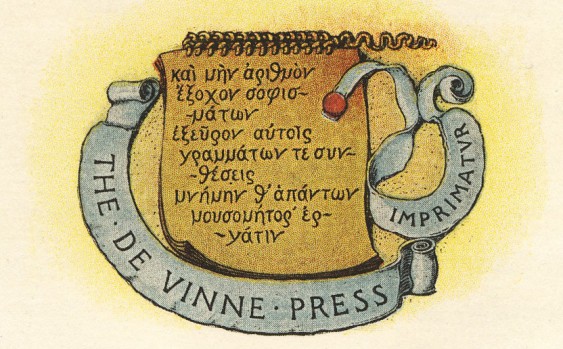 Designed by architect George Fletcher Babb, this device was first used it as a motif in the terra-cotta cartouche at the entrance of the De Vinne Press Building. Appearing on De Vinne Press imprints from 1886 on, it depicts a tablet bearing a saying of Prometheus in Greek: “and further I discovered for them [i.e., mankind] numeration, most striking of inventions, and composition, nurse of the arts, producer of the record of all things.” This color version is from the title page of the De Vinne Press 1907 type specimen.

No one has earned a place in the annals of American printing history more solidly than Theodore Low De Vinne (1828–1914). His encyclopedic understanding of the craft, his advancement of its technology and design, his appreciation of its history, his business leadership, and his many writings earned him, among his contemporaries, the designation “Dean of American Printers.”

De Vinne was a founder of the Grolier Club, where he designed and printed most of its publications during his lifetime. He collaborated with R. Hoe & Co. to advance fine printing from hand presses to power presses. In an age when the foremost method of illustrating popular periodicals was wood engravings, he was the recognized expert in printing them.

His own taste in typography evolved from florid Victorian styles of his youth to the crisp Scotch-face fonts that he favored in his later work. He did not personally embrace the book as objet d’art, although he produced books in many different styles. In his view, the purpose of printing was to present an author’s thoughts as attractively but as clearly as possible. In his later work he used decoration sparingly and illustrations only to illuminate the text.

Recognized for the superior quality of his presswork, De Vinne became the printer of choice for many institutions, publishers, and bibliophiles. One of the two typefaces he designed, Century, still enjoys popularity. While researching and writing ten books and 140 articles, he amassed a comprehensive and valuable library. The Romanesque Revival De Vinne Press Building on Lafayette and Fourth Streets in Manhattan, built to his specific needs, is today a city, state, and federal landmark.

For all his contributions to the field, De Vinne was widely recognized both in the printing fraternity and in society at large. Many honors came his way, including numerous medals, a bronze bust created in his lifetime, and honorary degrees from Columbia and Yale Universities. In every way, he exemplified the centrality of printing in nineteenth century life; Theodore Low De Vinne was a master of “the art preservative of all arts.”

On the centenary of his death, the Grolier Club offers a public exhibition from February 19 through April 26, 2014, curated by Irene Tichenor and Michael Koenig. Jerry Kelly designed the richly illustrated exhibition catalogue. For public programs during the exhibition see grolierclub.org.

Irene Tichenor is the author of No Art Without Craft: The Life of Theodore Low De Vinne, Printer (Godine, 2005). She is a Past President of APHA and a Past Vice President of the Bibliographical Society of America and has just been elected to the Council of the Grolier Club. She has a PhD and an MLS from Columbia University.