Born in Delaware in 1867 and a long-time resident of the First State, Eldridge Johnson rose from humble origins as a machine shop apprentice to perfect and patent, with Emile Berliner, the early gramophone, the Victor Talking Machine. Selling 1,696,000 phonograph records in 1902, Johnson became one of the wealthiest Americans in the first decades of the twentieth century. This talk is about not only Eldridge Johnson himself, but also about his love of Lewis Carroll’s Alice books leading to his purchase in 1928 of the manuscript of Carroll’s first draft of his famous Wonderland book, originally called Alice’s Adventures Under Ground. The talk will also address his meeting with the real Alice, not the 10-year-old girl of the book, but the 80-year-old Alice Hargreaves (nêe Liddell), when she visited the U.S. in 1932 and the interesting fate of the Under Ground manuscript while in Johnson’s possession and what happened to it after his death in 1945. 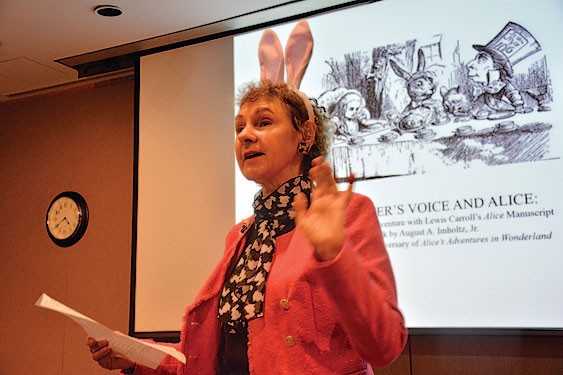 Introducing August to the packed house, University of Delaware
faculty member, Margaret Stetz, added a bit of color to the conversation. 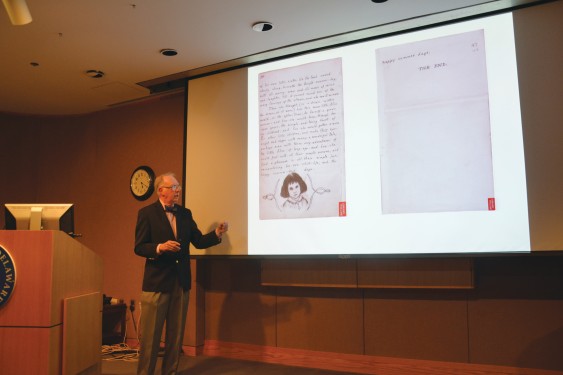 August discussing the discover of the manuscripts
original drawing of Alice which was under a tipped-in photo. 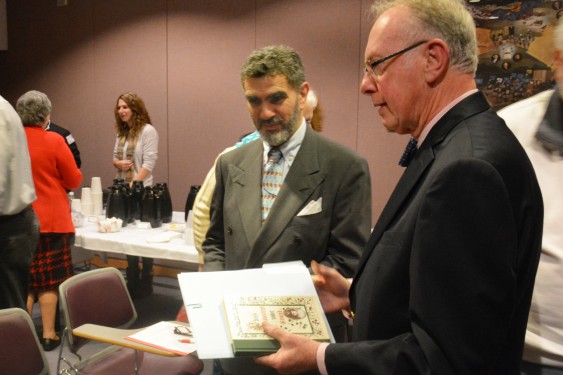 August A. Imholtz, Jr., a Chesapeake Chapter member, was the Government Documents Vice President of Readex, a digital publishing company. A former president of the Lewis Carroll Society of North America, he is also a past president of the Baltimore Bibliophiles, a member of the American Library Association’s Rare and Endangered Government Publications Committee, and a member of the Lewis Carroll Societies of Great Britain, Canada, and Japan. He has written or edited several books and published more than 100 articles on Greek and Latin philology, Lewis Carroll, and other subjects. He has lectured at Cambridge University, the Smithsonian Institution, Princeton University, the Foreign Language Library in Moscow, and other institutions.

This talk was associated with “‘We are all Mad’: The 150th Anniversary of Alice’s Adventures in Wonderland,” an exhibition (November 20–December 18, 2015) in the Guenschel Case, located in the University of Delaware Morris Library’s Information Room. The display included a copy of the facsimile of the Alice manuscript Eldridge Johnson had printed in Vienna in 1936.

The talk was a huge success with the venue completely filled.