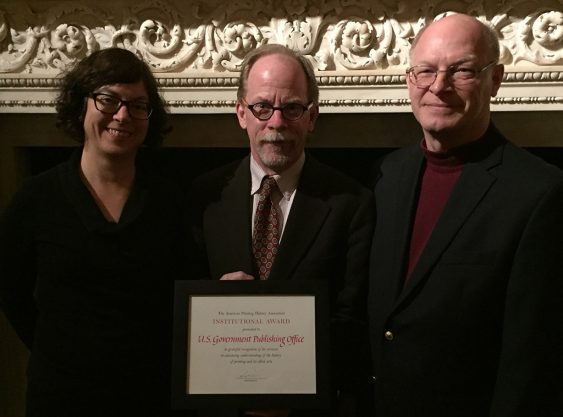 The U.S. Government Printing Office, now known as the Government Publishing Office, has provided printing and dissemination support functions to the U.S. Government for major historical events for nearly 156 years. In 1862 production began on the printing and distribution of President Abraham Lincoln’s Emancipation Proclamation, perhaps the most historically significant job ever undertaken by the GPO. In late 1964 GPO produced the Report of the President’s Commission on the Assassination of President Kennedy, commonly known as the Warren Report. Over that period and into the present, GPO has reflected the changing technologies, techniques, workforce, and standards of the printing industry in general.

In order to make its historic resources available to the public, GPO reactivated its history program, with dedicated staff, to serve the agency and outside researchers.

For its efforts in preserving and documenting its history, which reflect the history of the printing industry, as well as making those resources available to the public, I am pleased to present the U.S. Government Publishing Office with the 2017 APHA Institutional award. George Barnum, Agency Historian, will be accepting the award on behalf of GPO Director, Davita-Vance Cooks–please join me in congratulating the GPO!

With thanks to the Awards Committee and the Trustees, we’re very pleased and very honored to receive this award, and to find ourselves among the distinguished roll of previous laureates.

The Government Publishing Office has had a program for collecting, preserving, recording, and interpreting the history of the agency off and on for about the last 30 years. In 2010, after a few years of there having been no designated agency historian, I was appointed with the immediate task of marking our 150th anniversary in 2011. In preparing these remarks, I looked back over the list of the History Program’s projects of over 30 or so years. I’m pleased to say that it’s a good long list, and that a satisfying amount of it has taken place on my watch, with the inspiration and collaboration of many people, not least my immediate boss Andrew Sherman, and my predecessors James Cameron, Daniel MacGilvray, and Barbara Shaw.

We published a new official history in 2011 (and a second, revised edition of it last year), published (this very week) a book of over 200 photographs (and will shortly make that collection available on the internet), created a 2000 sq. ft. ongoing history exhibit that highlights the industrialization of the printing and binding trades in the late 19th and early 20th century, GPO’s prodigious output, and the people who have spent their working lives as part of the GPO family. We preserved a marvelous collection of wood display type that is now used by the students at the Corcoran College/George Washington University. There have also been many smaller projects including a series of bi-weekly lunchtime history talks for the staff (and anybody else who happens to be around).

My fellow GPO employees often say to me after a history talk or other presentation, “Oh, I just love history.” Grateful as I am for their interest, this comment always takes me back to the prospective library school students I used to interview on “career night” when I taught in the at Kent State in the early 90s:

Me : What makes you want to get an MLS?

To those folks I generally suggested an application at Barnes and Noble rather than a master’s degree. But in the almost-decade that I’ve been GPO historian, I think I’ve started to understand what my co-workers mean.

Government agencies, like many other organizations, are particular, peculiar ecosystems. Their particularity derives from their object of providing a benefit – a service, generally – to people, largely without payment of a fee or much reference to any qualification other than citizenship (and sometimes not even that). GPO is particular and peculiar because it has at its core not only this somewhat abstract duty (embodied in the free and open provision of Government information to the public) but also the very concrete, hands-on mission of an industrial workplace. We actually make stuff.

And while what we make has changed radically in the last 20 or 30 years from primarily ink-on-paper documents (which we still produce an awful lot of) to a mix that includes almost every kind of digital information product you can name, the presence of GPO’s mission is always shining through.

This combined sense of being in the service of the American people and at the same time part of a long tradition of craft-based industry is in the broadest sense what sparks my co-workers’ involvement, investment, and pride in the Office, which I see demonstrated all the time. And from that, I feel, grows the respect and interest they have for the history of the Office. I’ve been very lucky to have had the time, support, and resources to look rather closely this thing we call (in a kind of shorthand) “the GPO way.” It has roots in a lot of things – apprenticeship, the traditions of the printing and binding trades, patriotism, wartime experience, progressive workplace reforms.

One might, perfectly sensibly, ask why a Government agency, and not necessarily a glamorous one either (the State Dept. or NASA we are not) needs a history program at all. I’m reasonably sure that nobody in this room would ask that, but you can be assured that it’s a question that will be asked in the days ahead. If the question is about the significance of the work that my three predecessors and I have done, off and on, for 30 years, here are some thoughts:

And ultimately the public are beneficiaries of the sense of service and pride in work that comes out of it. My own understanding of GPO’s 156 years is that, owing to that sense of service, there has been a continuing, uninterrupted stream (a river, really) of innovation and adaptation to constantly changing technology, as well as to constantly changing requirements and expectations. It caused us to rise to the challenges of changing economic conditions, world wars, technological revolutions, and yes, political upheaval. It saw us grow to be the largest printing plant on the planet, and has likewise guided us as those numbers of people and machines have decreased while our mission remains unchanged. What is always there is the drive to fill the orders of our Government customers as expeditiously and economically as possible, and to make the product of that work, which has already been paid for by the taxpayer, not only a good piece of work but as broadly and readily available as possible, which we do in a variety of ways, not the least of which is our long partnership with libraries in the Federal Depository Library Program. Without that extra spark, what I look after is only a large file of photographs of industrial machines. It’s my privilege and my joy to document and interpret that particular and peculiar marriage.

Looked at through the lens of study, recording, preservation or dissemination of printing history, (which the APHA Award honors) I am both very proud of the breadth and variety of the list of accomplishments, and humbled by the Awards Committee and Board of Trustees judgment that ours is a “distinguished contribution.” We are very grateful. And while I’m on the topic of gratitude, I must also recognize Chris Sweterlitsch, who wrote the nomination, for which we’re also exceedingly grateful. I’m delighted to accept the 2017 APHA Institutional Award on behalf of the Director of the Government Publishing Office, and the 1700 proud and dedicated men and women of the GPO, a bunch of whom “just love history.”