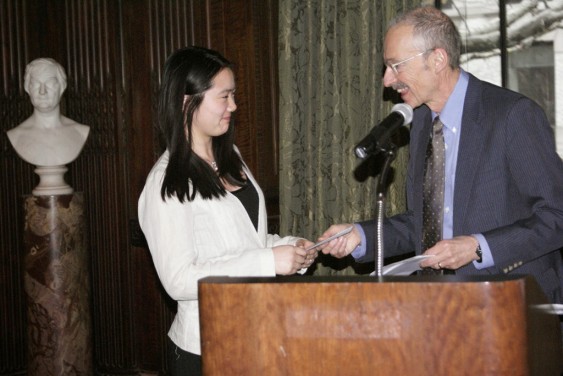 APHA is pleased to announce that the 2015 Mark Samuels Lasner Fellowship is awarded to Huiying Chen for her proposal “Printing in Manchu Language in Eighteenth-Century China.”

Ms. Chen holds a bachelor’s degree from Tsinghua University in Beijing, China, with a double major in English Language and Literature and in Economics. She earned a master’s degree from the University of Chicago, and is at present a doctoral student in history at the University of Illinois Chicago. She plans to use her fellowship to fund travel to Beijing in order to study original artifacts produced by the Imperial Printing Office under the Qing dynasty, between the mid-seventeenth century and the mid-eighteenth century.

Specifically she plans to focus on the printing of a series of dictionaries, beginning with the 1708 publication of a bilingual Manchu-Chinese dictionary, and expanding to a multi-lingual dictionary that involved printing in five languages: Manchu, Mongolian, Tibetan, Uighur, and Chinese. Although her dissertation will also take into account the role of state printing in relation to the imperial aims of the Qing dynasty, her fellowship research will concentrate on the printing of Manchu. As she explains in her proposal, besides the political significance of printing in Manchu, the actual printing process is also very important, although it remains little studied. Printing a foreign language was not new to the Chinese, since Chinese artisans had printed in other languages, such as Korean and Mongolian, as early as the sixteenth century. Manchu, however, would have been a challenge, because its written script was created only in the 1620s and was not standardized in terms of font, style, and format. Based on preliminary examination of some of the artifacts available only in Beijing, Ms. Chen believes that she can find out how the printing of Manchu took place and was developed in the Imperial Printing Office. In the judgment of the Fellowship Committee, this project will make a significant contribution to the history of printing in China, and will also potentially provide evidence for cross-cultural comparison between multi-lingual printing in China and polyglot printing in Europe.